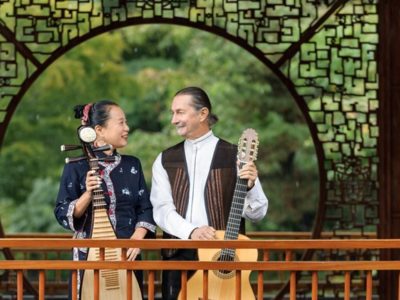 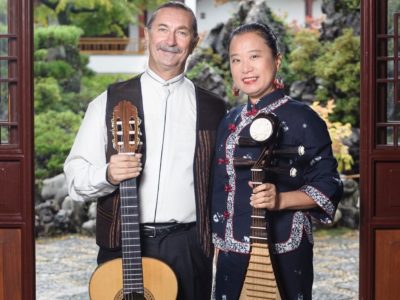 Imagine China, Quebec, South America and Ireland sitting down for a musical session. That’s the remarkable sound of Silk Road Music. As with the changing face of Canada, Silk Road’s members come from wildly different backgrounds. The members of Silk Road Music are:

Qiu Xia He, born in Shaanxi, China, was chosen to perform with the Shaanxi Music and Dance Troupe, a special ensemble formed to tour Canada. While performing at the Vancouver Folk Music Festival, she decided not to return home. Starting in 1991, she toured the world with her own Juno-nominated ensemble, Silk Road Music. As a member of Silk Road Music, Qiu Xia has earned a Juno nomination, two Canadian Folk Music Award nominations and two West Coast Music Awards.

Andre Thibault: Quebec born, multi-instrumentalist, specializing in Latin guitar styles. He has developed a very personal sound on the Middle Eastern lute (Oud), as well as percussion instruments and wind instruments including Shanaii and indigenous flutes.

Liam MacDonald: versatile, charismatic in personality and creatively tasteful in execution, Liam is one of the most in-demand percussionists in Vancouver.

The ensemble can also perform as a duo featuring Pipa and Guitar in addition to traditional Solo Chinese Pipa music by Qiu Xia He. The Pipa is a delicate, almost harp like stringed instrument that creates the perfect Asian soundscape for dinner music.

“…a must for fans of Chinese music and especially for world music enthusiasts who delight in cross-cultural fertilization.”